Last week I signed a supplementary POD contract (print-on-demand) for all eight books in the Collective Obsessions Saga (written by me as Deidre Dalton). I always get nervous when signing contracts because they give me the queasy feeling of being "locked in" for a stretch of time with no avenue of escape (likely related to my relationship commitment phobia). There's no backing out now! 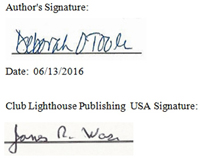 New covers are being designed for the paperback editions of the eight novels. I'm perhaps most anxious to see the new cover for book #3 The Twain Shall Meet, for which I gave quite a bit of suggestive input. The physical appearance of the main male character is based on a real person (but my lips remain forever sealed as to his true identity). Hopefully he will be as near as can get for the paperback cover. He inspired many of the new "bonus" scenes I wrote back in February for the book's reissue this year.

I'm keeping my fingers crossed that it comes to pass without a hitch . . .

POSTSCRIPT (06/26/16): The Advent (book #1 in the Collective Obsessions Saga) became available in paperback at Amazon as of this morning. I wasn't really expecting such a quick turnaround as we just signed off on the new front and back cover design for the paperback edition last week (see picture at right; click on image to view larger size in new window). I had no idea it was going to happen so fast. When I saw the email from my publisher this afternoon, I nearly choked on my tea. Being published NEVER gets old. If I could dance a jig on the moon, I would!

*POSTSCRIPT (06/29/16): The paperback edition of Quixotic Crossings (book #2 in the Collective Obsessions Saga) is now available at Amazon. The storyline takes place between 1926 and 1958, focusing on established characters Claude Mondoux, Phoebe McGarren, Colleen Larkin and Colm Sullivan. Molly Larkin also makes several ghostly appearances in Quixotic Crossings. As for book #3 in the series (The Twain Shall Meet), it may take a bit longer for its paperback release as new scenes I wrote for the novel are currently being edited, and the new book cover has yet to be finalized. I'm keeping my fingers crossed that all eight books in the family saga are out in paperback by summer's end.

*POSTSCRIPT (02/11/17): The Twain Shall Meet (book #3 in the Collective Obsessions Saga) became available in paperback at Amazon today. The book contains 60 pages of extra content, including new scenes and dialog. An innocent meeting as children sparks a fateful yet perilous liaison between Shannon Larkin and Mike Sullivan. Will their romance follow the same tragic path forged by their mutual ancestors Colm and Molly? Three novels down, five more to go!

*POSTSCRIPT (06/07/17): The Keeper's Journal (book #5 in the Collective Obsessions Saga) became available in paperback at Amazon today. Shannon Larkin is forced to confront demons from her past, while her daughter Angie discovers Colm Sullivan's journal in the old lighthouse keeper's cottage. The diary sheds light on the history between the Larkin and Sullivan families, but may be too late to stop the sisters of Mike Sullivan from wreaking vengeance on the Larkin family for sins and tragedies of the past. Five novels down, three more to go!

*POSTSCRIPT (08/26/17): Hearts Desires (book #6 in the Collective Obsessions Saga) became available in paperback at Amazon today. Shannon's son Jamie Page begins to understand his lifelong yearnings but fears his family will never accept them. His first love affair with a nefarious character nearly costs his life, but brings to light his hidden desires. Happiness continues to elude the family, as if a dark shadow of evil has settled over the family estate. Six novels down, two more to go!

*POSTSCRIPT (10/29/17): The Twilight (book #7 in the Collective Obsessions Saga) became available in paperback at Amazon today. Shannon Larkin and Scott Page are happy in their long marriage, but a tragic loss forces Shannon to delve into the past in order to face ugly truths about her husband. Devastated, she retreats into her own solitary world. A stranger brings Shannon out of self-imposed exile and shows her the beauty of unconditional love exists after all. Seven novels down, one more to go!

*POSTSCRIPT (11/30/18): Megan's Legacy (book #8 in the Collective Obsessions Saga) became available in paperback at Amazon today. Megan Larkin falls for dashing Boston attorney Luke Castaneda, a newcomer to Larkin City. Locals try to warn Luke about Megan's family and their history of madness and tragedy, but he is determined to make her his wife. Other elements are at work to ensure the union never takes place, bringing another veil of evil over the Larkin's and their self-named city in the guise of a serial killer. Megan is forced to discover the truth and to set herself free from a legacy of family secrets and obsessions. Eight novels down, no more to go! :(