My romantic past has never embarrassed me, so I certainly offer no apologies. Each of my three marriages and the experiences within made me the person I am today, so I have no complaints. 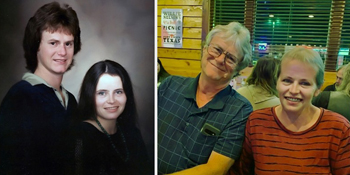 Click on image to view larger size in a new window.

My first marriage was also my first love. Married at nineteen, divorced at twenty-six. I don't recommend getting married as a teenager, even if you live with the person for a few years first.

My wedding to Jerry was rather unusual. We had already been living together for almost two years when, on the night of November 5, 1982, we invited our respective parents to dinner at our home and got married in front of them instead. Our minister was someone by the name of "Bishop Hunt," prophetic indeed. We did go to dinner that night, following the brief ceremony. It's where my food love-affair with Benihana began.

Sadly, Jerry and I separated in 1988. It takes two to tango, but I think my relative inexperience and youth pre-wedding was partly to blame. I never had the chance to sow my "wild oats." It would be nearly thirty years before Jerry and I would see each other again.

While my personal life journey has never taken an easy or normal route, events occurring in 2018 were bizarre even for the likes of me. Yet they resulted in a happy set of circumstances. To make a long story short, Jerry contacted me via Facebook on October 20, 2018, sending me a friend request. We had not seen or spoken to each other in decades. In the interim, we had both remarried and carried on with our lives. Meeting again for the first time after nearly three decades was quite amazing in itself, but what followed was even more remarkable. We again developed a relationship rather quickly, and within six months had moved in together. We've been cohabitating ever since, and to that end I definitely consider Jerry to be my "significant other."

Life can turn on a dime, and then come full circle. I'm living proof of it, happily. But I often wonder - where did all the time go, especially all the years in between when Jerry and I were fully aware of each other, yet somehow lost touch?

However, life has a funny way of coming full circle, I'm happy to say. It seemed to go back to what was meant to be all along.

And if anyone wondered about my use of the writing pseudonym Deidre Dalton, the truth is finally revealed. ;) 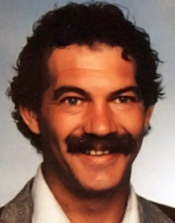 My second marriage was the result of a blind date over Memorial Day weekend 1990. We knew each other all of six days before tying the knot at the courthouse in Elko, Nevada on June 1, 1990.

The death-knell in our relationship began the year we moved to his hometown of Pocatello, Idaho in 1991. It was a big mistake. The constant interference from his family mixed with his long-term substance abuse made the situation impossible, although I did stick it out for nearly ten years. The best thing about my time in Pocatello was getting Foofer in 1997. 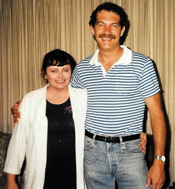 Rocky passed away on April 19, 2008, seven years after our divorce became final. We never did have contact after the final decree, so I have no idea what his life-situation was like at the time of his death.

Being with Rocky was a romantic whirlwind, more so than at any other time in my life. He gave me flowers out of the blue, wrote me love letters and little notes for no special reason, and provided a sardonic humor that kept me in stitches. While the end of our marriage left behind lingering bitterness, the first years were very giddy and I'll always remember that. 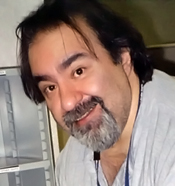 My third marriage was a disaster romance-wise, but Wilbert and I were the best of friends - much like brother and sister on a very close level. To put it in a nutshell, Wilbert and I began as friends and ended as friends.

We first met at Lakeview Hospital in 2000, where both of us worked in the business office. I was still in the midst of extricating myself from my second marriage, so Wilbert and I remained "work" friends more than anything else for quite awhile.

We married at the Farmington Courthouse on February 21, 2002, with Foofer as our main witness. 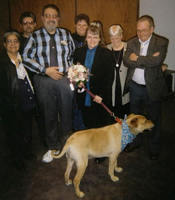 (Above): Foofer was the main witness at my wedding to Wilbert Alviso on February 21, 2002. Pictured from left to right: Elva Alviso, George Alviso, Wilbert, Dawn Ashley, Me, Foofer, Mum and Dad (Joyce & Barney O'Toole).

A few days after the wedding, we moved to Spokane, Washington. We bought our first house together, and were generally happy for many years. We could talk about anything, and often did. We eventually separated in 2007. The bright spots of our time in Spokane was finding Rainee in 2004 and Kiki in 2006.

Wilbert passed away on September 2, 2011 after a brief illness. He was kind, considerate and gentle, a person who never wished harm on anyone. Even during his last weeks of great pain and suffering, his thoughts were of others as made obvious by some of the instructions he left behind. Suffice it to say he was unselfish to the end.

I miss Wilbert to this day.