Rainee Gabriella Alviso O'Toole was my oldest "daughter." She shared a birthday with Kiki (March 31), although they were obviously born in different years (Rainee in 2004, and Kiki in 2006). 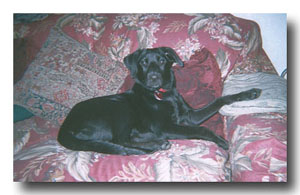 Rainee passed away on 16th February 2019. She developed a tumor which was inoperable, so I was tried to make her last days and weeks as comfortable as possible. I was with her right until the end, saying her name and telling her I loved her until the moment she drew her last breath. It was as emotionally wrenching to me as losing both my parents. I had never been able to stay in the same room when both Foofer and Kiki drew their last breaths, but I steeled myself to be there for Rainee. I couldn't bear to leave her alone. Love and thanks to Jerry for being there with me, and also much thanks to Nancy and Brendan for their private words of support.

I found Rainee through the Spokane Humane Society, via PetFinder. I wanted to get a companion for my older dog, Foofer. One day in the spring of 2004, I happened to be browsing for puppies in my area when I caught sight of Rainee's picture. Her personality description read:

Rainee is a very adventurous girl and opinionated. She has a mind of her own. She loves to be held, but on her own terms. Rainee enjoys playing outdoors with her siblings. Tug-o-war and chasing the ball are a couple of her favorite activities.

I filled out the required adoption papers for her, and within a week I was holding little Rainee in my arms. Her first action was to urinate all over me, so I knew then and there she was coming home with me.

Rainee's PetFinder description proved to be accurate. She had a stubborn streak a mile long. Nothing seemed to daunt her, apart from the sound of wailing sirens and steep staircases.

Rainee has her own website called Rainee's Parade. The pages include a biography in words and pictures, and a selection of related links hand-picked by Rainee herself.

And don't forget to pay a visit to Rainee's Parade.