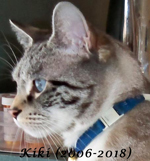 Kiki Alexandra O'Toole was my youngest "daughter." By chance she also shared a birthday with Rainee (March 31), although they were obviously born in different years (Rainee in 2004, Kiki in 2006). 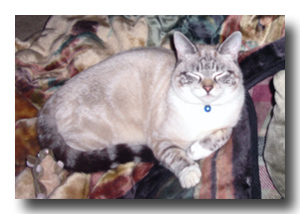 Kiki passed away on 2nd May 2018. I found her nearly unconscious that morning, and rushed her to Lakeview Animal Hospital. The doctor did an ultrasound and discovered a massive tumor in her stomach. He told me she would not survive, even with surgery. I made the difficult and heart-wrenching decision to have Kiki euthanized rather than allow her to suffer. 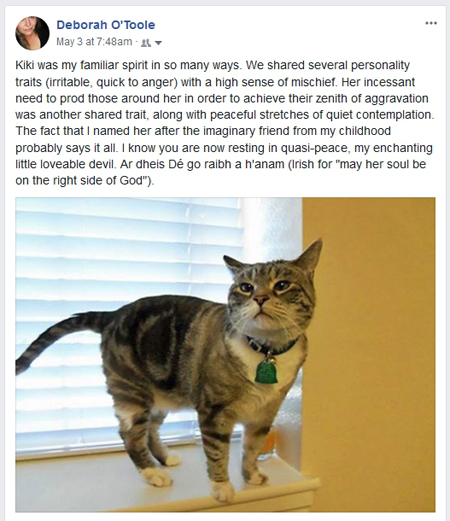 Thanks to everyone for their words of sympathy. Also thanks to Ann and Chris for coming to the animal hospital as I was falling apart, and to Tracy, Dawn and Umar for their private words of support.

Kiki (pronounced kee-kee) was a Bengal and Siamese cat-mix, with startling blue eyes and white/gray fur coloring. She was small in stature, with a gray-and-white striped tail. The veterinarian estimated her age to be six months in October 2006, so I decided to give her the same birthday as Rainee to keep it "in the family."

I had a slew of nicknames for Kiki: Keek, Keeker, Keekster, Kick, Kee-Koo, and Kakester. When Kiki went on the prowl around the house, I often warned all those who listened: "The Devil is Loose."

I found Kiki on October 1, 2006. The following was my blog entry for the same day:

Early this morning Wilbert took the dogs to the store for the ride, and after they left I could hear the pitiful cries of a kitten. I stood on the front porch but couldn’t see anything. I started calling out “here kitty, kitty” and then walked toward the sound of the howls.

The duplex next door has an open-fenced playground of sorts, with a gravel floor. As I came closer, I could tell the meowing was coming from the playground. I was in my stocking-feet, so I stepped gingerly on the gravel until I found the source of the caterwauling.

Someone had taken a kitten and placed it under an upside-down laundry basket, pushing in the edges so that they sunk into the gravel. The poor kitten was trapped, and obviously miserable. I pulled up the laundry basket and carried the kitten back to my house. She seemed healthy enough, if not a little stressed and tired.

I am furious at the blatant abuse of an animal. If I knew who the cat belonged to I would try to find out what really happened. I have no idea who the owner is. The people living in the duplex already have a cat, a black and white male named Oreo, but I have never seen the new little feline before today.

At first I was going to give Kiki over to the local animal shelter, but she grew on me rather quickly. I think the turning point came when Kiki, in a pique of rage after I put her in the computer room and shut the door one evening, started nipping gently at my knuckles, her blue eyes crossed with anger. That she was comfortable enough to show her annoyance with me was a sign of progress. I like spunk and diverse character traits, and Kiki fit the bill.