Foofer was my beloved "child" more than he was a canine of strikingly handsome proportions. He lived to be ten years old, passing away in 2007. I still think about him every day, and miss him terribly. 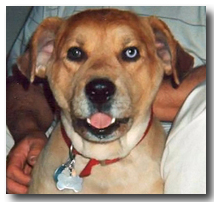 Foofer was born on Monday, 31st March 1997 in Chubbuck, Idaho. He came into my arms at the age of six weeks old, officially named Barbarosa. That's quite a mouthful for anyone, so with my penchant for nicknames I shortly dubbed him Foofer.

Why Foofer, of all names? As big as he was, my little darling was petrified of the oddest things – buzzing flies sent him charging for cover under the kitchen table, and he raced like a mad dog from the vacuum. On the other hand, his sheer size and barking volume used to petrify others in turn.

Foofer had unusual physical beauty. He was half-Chesapeake Bay Retriever and half-Siberian Husky, possessing one blue eye and one brown eye. People used to ask me if he was blind in one eye, but no he wasn't. He was simply perfect.

Foofer was the inspiration for my Short Tales Collection, which features eleven short stories about his many adventures.

My pooch Foofer was quite a character. I never really treated him like a dog. We had a 'mother-son' relationship from the time he came into my arms at the age of six weeks until his passing more than ten years later. Foofer not only gave much love, joy and laughter, he also inspired me to write a collection of short stories with his shining character as the star. What began as a few "shorts" as I like to call them, developed into a series of stories about Foofer and his adventures.

Foofer was my shining little light and my inspiration in so many ways. He made me laugh on a daily basis, and I could always count on him for unconditional love. We went through quite a lot together, Foofer and I, and he never failed me.