Not So Fictional Pets

Even though I'm a fiction writer first and foremost, more than once I've integrated the physical appearance or character traits of real people into my writing. These people can be family members, friends or complete strangers who just happen to catch my eye during the course of a normal day. The aforementioned people rarely recognize themselves after I've written fictional accounts around their characters, unless I choose to tell them about it.

Animals and treasured pets also figure into the mix on occasion. Aside from his own fictional wonderland found in the Short Tales Collection, Foofer also makes an appearance in The Keeper's Journal where he is discovered abandoned by Jamie Page. Jamie, who is also a veterinarian, adopts Foofer. The two become inseparable, exemplifying the master and devoted canine relationship. That being said, there is more to Foofer's seemingly casual presence in the book, which is scant when compared to the unfolding human drama in the storyline. Foofer is Jamie's vigilant protector in Hearts Desires (due for release in spring 2013), where he distrusts his master's new friend Jack Sansovino with spot-on canine instinct. 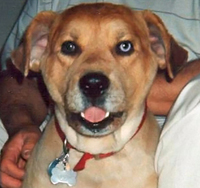 However, Foofer's true purpose becomes quite clear in Megan's Legacy, the final book in the Collective Obsessions Saga (due for release near the end of 2013).

Here's a sample from the upcoming Hearts Desires:

Parking next to Jamie's small truck by the front porch, Jack Sansovino alighted from his Corvette with three bottles of red wine. He stood for a moment, admiring the front of the cottage, noticing its well-kept look and trim lawn. Then he heard a dog barking.

"That must be Foofer," Jack thought as he stepped onto the porch. "I'll need to make friends with him, too, if I'm to make any headway with Jamie."

Jamie opened the door with a smile on his face, Foofer at his side. The big dog had one blue eye and one brown eye, both of them now on Jack. The husky tail wasn't wagging, so Jack reached out his hand so Foofer could sniff him.

"Foofer's a softy," Jamie claimed, watching the interplay between his dog and new friend. "He comes across as fierce, but deep down he's a real gentleman."

Foofer sniffed Jack's hand cautiously, eyes alert all the while, but his tail still refused to wiggle in affable greeting.

"Give him time," Jamie said in apology. "Foofer tends to be protective of me, but he's in no way mean and ferocious despite his appearance."

Jack withdrew his hand, smiling. "So it's safe to come in?" He glanced down at Foofer, taking in the dog's rigid stance. At least the beast wasn't barring his teeth or growling.

Jamie opened the front door wider. "Welcome to my home."

Foofer remained leery of Jack for the rest of the afternoon, but not once did he display open hostility toward him. He simply kept his distance from Jamie's new friend, but kept a watchful eye on him just the same.

Kiki appears in Megan's Legacy, where she is found abandoned by the main character Megan Larkin. Kiki is mentioned fleetingly throughout the book, but she is part of the dramatic saga finale albeit in subtle fashion.

Here's a snippet from the upcoming Megan's Legacy:

After dinner, Megan went to her rooms on the fourth floor. Kiki seemed to prefer the relative privacy, inspecting her litter box in the bathroom, and then sampling from her dry food and water bowls set out on the long counter space. She walked around the two rooms, sniffing, staring and generally giving her seal of approval to her new home.

Megan changed into her pajamas, top and bottom, which were dotted with cartoon depictions of bunnies. She crawled into bed, pulling the covers around her waist. After a few minutes, Kiki leapt up and found her. She began kneading the coverlet, staring at Megan with sleepy eyes.

"You're safe for life, Keekster," Megan whispered with a smile. Kiki curled up next to her, making sure their bodies touched thorough the blanket.

Megan was just about to doze off when the telephone on her nightstand table rang shrilly.

It was Luke. "Where are you?" she asked groggily.

"I'm on my way back from Ellsworth," he told her over his cell phone. "Do you feel like joining me for a drink at the Amber Whale?"

There was silence on the other end of the telephone for several seconds. "Who the hell is Kiki?" Luke finally asked, obviously irritated.

Megan couldn't help but laugh. "Kiki is my new kitten. I found her abandoned near the harbor today. She's so cute, so adorable…" She paused. "You're not allergic to cats, are you?"

"I don't think so," he said dryly. "I take it Kiki has the pleasure of sleeping with you while I'm headed home to my lonely bed. What do I have to do? Grow whiskers? Grow a tail?"

She giggled. "You're such a tease."

"I'm taking Kiki to the office with me tomorrow," she informed him. "Why don't you pick me up for lunch so you can meet her?"

"Is that my consolation prize for being forced to sleep alone?" he groused.

"Take it or leave it, buster."

"Ah, I'll take it. On that note, pleasant dreams to you and Kiki."

I have yet to find a fictional place for Rainee, aside from her appearances in Foofer Meets the Puffins and Foofer & the Ghastly Ghost. I've felt bad about it, wondering why something singular for her hasn't come to mind. Not to worry, though. I recently came up with the perfect story-bound scenario for her, although it probably won't see the light of day for a few years. 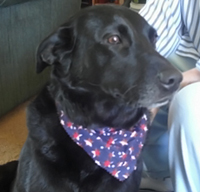 Rainee is streamlined, elegant and behaves with purpose. Even as a puppy in 2004, she feared nothing in her path (including Foofer, who at the time was 109 pounds to her wispy but lively 13 pounds). Her main focus is food, followed by her desire for daily trips in the car. She loves nothing better than to stick her head out the window as we tool down the road, although I'm careful not to give her too much leeway. She's a living doll.

As I've written about many times before, since Foofer's passing Rainee and Kiki have been at odds with one another. Sadly, I have to keep them separated for the most part. Both of them seem to think they inherited the mantle of dominance after Foofer died, which has resulted in several hysterical confrontations.

Both female, neither Rainee nor Kiki give an inch to each other. I love them both to bits, so it's our way of life for now. I liken it to having two very different – and difficult - children. The more difficult they become, the more I seem to treasure them.

Unconditional love is a wondrous and rare thing.