I've had to push back release dates for my historical essays about Lizzie Borden and Michael Collins yet again. It can't be helped at the moment, unfortunately. As of this writing, I've shifted both essays for conclusion sometime in 2024.

The reason being? I'm completely immersed in the writing of two books: Limb of Iniquity and In the Shadow of the King. I was hot and heavy on Limb of Iniquity for several weeks, but have now shifted gears to In the Shadow of the King. I'm estimating it will take me at least one year to finish both books, therefore leaving me little time to work on the half-completed essays. 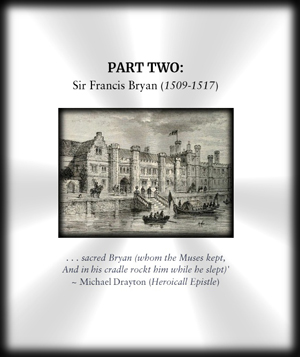 (Above): Introduction page to Part Two of In the Shadow of the King. Click on image to view larger size in a new window.

As of this writing, In the Shadow of the King is being presented in ten parts, along with a prologue and an epilogue. As with all my books in progress, content and layout might be subject to change.

My significant other recently asked me: "How do you keep two different books straight in your head? Does it ever get confusing?"

The answer is no, at least for me. The two books have vastly different storylines, and are in truth nothing alike. While Limb of Iniquity is a continuation of the Collective Obsessions Saga in the modern day, In the Shadow of the King is a trip back in time to the Tudor era of history (roughly 1509 up to 1550). The research alone takes up quite a bit of time as I'm keen to get historical facts in order, even though the book is a semi-fictional account of Sir Francis Bryan.

Tags: Collective Obsessions; Historical Essays; In the Shadow of the King