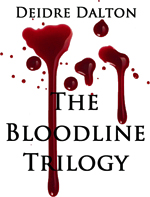 Torn Bits & Pieces is probably my least-known book mainly because it's a collection of poetry I've written over the years. I'm not a poet, not by a long shot. However, there are times I feel the need to jot down something poetic, hence my collection. 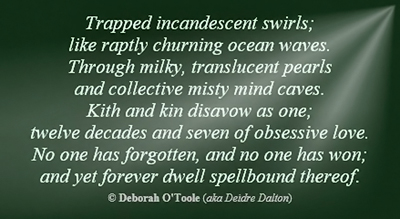 I recently finished Bloodlust (book #2 in the Bloodline Trilogy). One of the main characters in Bloodlust is named Kirk Lester. He's a bit of a slime ball, but also a poet. The fictional character "writing" the poems began as a blank slate, somewhat akin to a block of bland cheese. I wanted to give him a tangibly unique trait as I developed him, thus a fictional poet was born.

Kirk Lester's gift with prose also emphasizes multiple traumatic events in his life, as if his spurts of creativity were inspired by diversity and outright insanity.

Blood of My Father is from the upcoming Bloodlust: 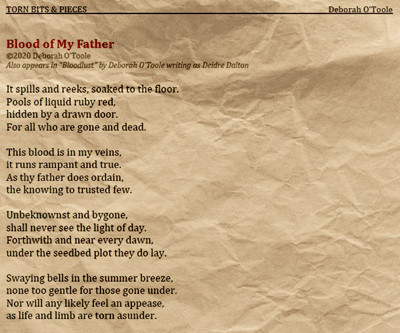 To that end, there are fourteen new poems stemming from Bloodlust, all of which will be added to Torn Bits & Pieces in due course. I created them on the fly - some are short, others longer - and all in relation to the fictional storyline.

I would like to make clear that Bloodlust is not a book of poetry, but rather a 400+page fiction novel sprinkled with smatterings of poetic prose written by one of its angst-ridden characters.

There might also be a few "overflow" poems that find their way into Blood & Soul (third and final book of the Bloodline Trilogy), which is scheduled for completion in 2021.