At the moment, I'm working on two books simultaneously: In the Shadow of the King and Limb of Iniquity. The former requires more concerted effort as the story is based on a real-life character named Sir Francis Bryan. I'm doing my best to stay true to the times with modes of dress, common food dishes and other sundry. It can be daunting at times, but I'm determined to finish it within the next year.

Limb of Iniquity is another kettle of fish because my imagination is free to roam as I put words to paper. Reacquainting myself with the Larkin and Sullivan families is akin to visiting an old friend. I never thought to be involved with them again, but here I am. To be honest, it's been a pleasant process, part of which included re-reading all previous eight books in the Collective Obsessions Saga.

I also re-built the intertwined Larkin/Sullivan family tree using Roots Web 8, and adjusted the massive spreadsheet accordingly with new characters and other updates that fit into the storyline for Limb of Iniquity. 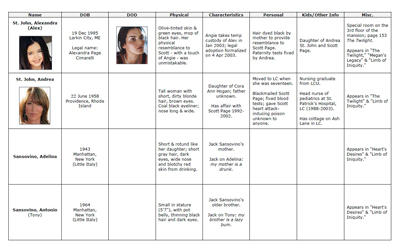 Here is a hint of what is to come, taken from my outline:

Limb of Iniquity brings to light the deadly antics of Alexandra St. John, who made her debut in The Twilight, Book #7 in the Collective Obsessions Saga.

Alexandra (Alex) was the illegitimate daughter of Scott Page, who was the longtime beloved husband of Shannon Larkin. Alex was abandoned as a child by her biological mother (Andrea St. John), only to be adopted by Angela Page, Scott's oldest daughter, and her husband, Tom Cimarelli.

Alex and Shannon have a difficult relationship. Shannon has little use for her late husband's bastard, barely civil to the child even as she grows into an adult. The hostility also creates tension between Shannon and Angela, a friction that endures for years and creates a breakdown of the mother-daughter bond. 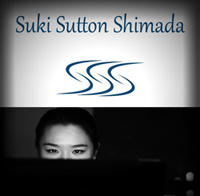 Suki is somewhat formal with most of her employees, but she takes a great liking to Alex. The two women become close friends, even sharing a bed together on occasion. Suki lives in a townhouse on Perry Street in the West Village. Suki is petite, slender and nearly flat-chested, with long, black hair and gray eyes.

Andrea St. John, who now calls herself Andrea Hogan, sends a text message to Alex just days before a pandemic forces people into isolation. Alex meets her birth mother at the Amano Cafe on 172 West 4th Street, near the Greenwich Village apartment she shares with Tom and Angie. Andrea has not aged well. Her hair is short and she has grown heavier, almost masculine in appearance. She tells Alex that her mother, Cora Ann Hogan, is living at a rest home in Larkin City, suffering from dementia. Andrea suggests that Alex go and visit her blood grandmother before she passes away, but Alex is reluctant. "Why should I do anything for you?" She asks scornfully. "You deserted me, left me to my own devices. Thank God Angie decided to take me in, or I might have ended up living in a foster home, or worse." Before she can digest seeing her mother again after so many years, Alex receives news about the pandemic hitting America.

When the Corona virus spreads across the United States in 2020, Alex and her adopted parents, Tom and Angela Cimarelli, flee New York City for the Larkin estate in Maine with Tom's aged father, Vito Cimarelli. They undertake the nearly seven-hour drive from Greenwich Village to Larkin City rather than ride public transport of any kind to minimize the risk of becoming infected.

Alex wreaks havoc on the Larkin estate, luring her young step-nephew Gabriel Page into a web of lust and revenge. The grisly death of a prominent member of the Larkin family seems to cement the St. John vow of revenge, which leads local police chief Lyle Gould to investigate Alex's background and the sudden reappearance of her birth mother.

Will Alex be the downfall of the Larkin family, once and for all?

Tags: Collective Obsessions Saga; In the Shadow of the King; Writing & Editing