"Celtic Remnants is a masterful weaving of a love story that nestles nicely within remnants of Upstairs Downstairs, Poldark, and finally Downtown Abby. The emotional force conveyed when the author seamlessly transitions from love scenes to heartbreaking moments is surprisingly memorable. It is because of this author's incredible skill and grace in storytelling that it serves well in telling of Celtic culture and its brutal struggles to achieve autonomy under British rule."

"The writing in Celtic Remnants is flawless...the plot flows smoothly and the hook is deep. High stars!"

"Celtic Remnants opens very well. The sounds, smells and views come to life with realistic feel and good pace. I also like the story itself - it is different and real. Good work!"

Deborah O'Toole is the author of Celtic Remnants, a novel of enduring yet impossible love and betrayal set in the political turbulence of Ireland, the glamour of London and the wilds of Scotland. 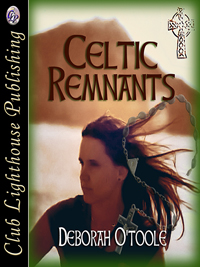 A young girl is shaped by horrific events which change her life forever. After Ava's brother and parents are killed by British soldiers, she vows to avenge their deaths as she picks up the pieces of her shattered world.

Before she can move on, Ava falls in love with handsome nobleman David Lancaster, eldest son of a belted Earl. Their relationship ends dramatically when his family refuses to accept her. Afterward, Ava sets her life on a course of violent revenge in the name of political justice with her childhood friend, Tim O'Casey.

Unable to forget Ava, David hires       a private investigator to look for her years later. When he finds her, Ava is hardened by more than a decade on the run and wants nothing to do with him. However, after being injured during an ambush in the English countryside, Ava and Tim go to David for help. He spirits them off to a remote Scottish hunting lodge to heal.

Momentarily safe amidst the rugged beauty, Ava begins to wonder if she can give up her deeply-felt political beliefs to build a normal life with David. Or will happiness forever elude them?

Can Ava Egan relinquish her political convictions, even for love?

Celtic Remnants by Deborah O'Toole was released by Club Lighthouse Publishing in June 2019.

Please Note: Celtic Remnants was previously released by Tyborne Hill and available on Amazon, Barnes & Noble and Kobo Books from 2013 to 2018. During that time, the novel was reviewed several times and was also the subject of an online radio interview undertaken by the author with Writers Alive/Blog Talk Radio.