Torn Bits & Pieces has been re-issued with three new poems, which were recently unearthed in a storage box.

A few months ago, a long-forgotten box of items were returned to me after many years. In turn, I decided to include the three poems found inside to the current updated edition of Torn Bits & Pieces. The newly discovered poems are I Will Never Marry, J.D. and Mind Control.

Deborah O'Toole is author of Torn Bits & Pieces, a collection of poetry which includes Black Eyes, Confusion & Mr. Barrett, Dark Blue Moon, Drama, Edward, Gentle Creatures, I Will Never Marry, In the Town in the Time, Intoxication, J.D., Mind Control, Moonstruck Madness, My Name is Called Disturbance, Religion, Sad Passing, Siembamba, Silver Lining, Striking with a Spirit's Knife, The Spell, Year of Blood, You're Just a Boy and many more > 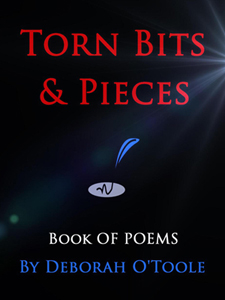 The book also includes Collective Obsessions (a poetic rendering based on the fictional saga of the same name by Deidre Dalton, aka Deborah O'Toole).