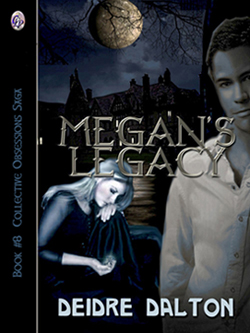 Megan is forced to discover the truth to set herself free from a legacy of family secrets and obsessions. . .

Megan Larkin, only child of Liam Larkin and Carly O'Reilly Sullivan, falls for Boston attorney Luke Castaneda. Locals try to warn Luke about Megan's family history of madness and tragedy, but he falls in love with the shy and retiring Megan, determined to make her his wife.

Other forces are at work to ensure their union never takes place, bringing another veil of evil over the Larkin's and their self-named city in the guise of a serial killer. . .

Megan's Legacy is currently available at Amazon and the Club Lighthouse Publishing website. Click here to read excerpts from the book.

As I've said before, it's bittersweet to see the Collective Obsessions Saga characters and storyline finally coming full circle, but the event is also very satisfying.

I finished writing Megan's Legacy in March 2011, the occasion causing me to pen a few blog entries about the milestone. This was the gist of the matter in 2011:

A few days ago I wrote the final page for Megan's Legacy, and shortly thereafter sent the manuscript to my publisher. Considering I began writing the storyline a few decades ago, I'm stunned rather speechless that it's finished, once and for all. Even better, I'm very happy with the way the story ended. A few months ago I envisioned agonizing over the finale, but it didn't happen that way. I knew exactly where I wanted to go, and that's where I took the story and its characters.

Sounds like a rather simple statement, doesn't it? However, completing Megan's Legacy also signals the end of the Collective Obsessions Saga. Having been consumed by the storyline and its characters for more than twenty years, it's a jolt to realize I no longer have to get up at the crack of dawn and work until midnight to make a dent in my planned vision for the books.

Just a year ago I thought I'd never see the light at the end of the tunnel, yet here I am. The rigid daily schedule I kept for so long is now history. I'm sure there will come a time when I'll impose the same schedule on myself for another project, but at the moment I'm a bit at loose ends.

One of my favorite regimens was to write longhand by night just so I could get away from the computer screen, and then type my notes by day. I'm not a natural typist, frankly, so writing longhand was enjoyable for me. I also had a few quirks that went along with the scribbles: round-stick grip black pens only, and countless pads of quadrille paper (five squares per inch on each side). I may have to start my next project sooner rather than later just to get back into my nightly swing.

To know that all eight books in the Collective Obsessions Saga will be released this year and next is keeping my head in the clouds. It's akin to a natural high, and I'm not sure I'm ready to come back down to earth yet. But real life marches on...

I can't express it any better in the present day.