Another year has almost come to an end, and I find myself contemplating what has been accomplished. The old adage of "how time flies" is certainly true, and makes one realize how precious each moment of every day really is. However, I have to admit the past twelve months have been very productive for me.

So begins my winter newsletter, which is now available online, and also for the first time as a PDF download. 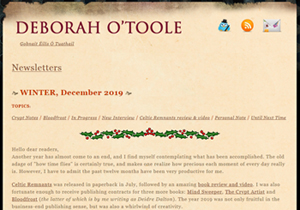 I'm having fun writing Glinhaven at the moment, especially after I recently added two new "elements" to the storyline. They include Moggy Malone Mochrie and Sith Mochrie (see photo below). 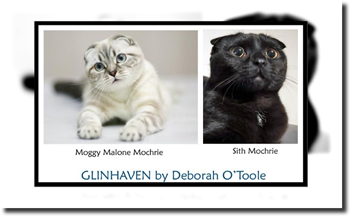 The two Scottish Fold felines now have a place in the story, their domain being "The Thistle" curio shop in Glinhaven Village, Massachusetts. For story purposes, Moggy Malone is elegant and dignified, while poor Sith is clumsy and goofy. I named them using researched Scottish lingo: Moggy is slang for "cat," while Sith is the word for "fairy cat" in Scots Gaelic mythology.

The Cat Sìth (Scottish Gaelic) or Cat Sidhe (Irish], Cat Sí (in new orthography) is a fairy creature from Celtic mythology, said to resemble a large black cat with a white spot on its chest. Legend has it that the spectral cat haunts the Scottish Highlands. The legends surrounding this creature are more common in Scottish folklore, but a few occur in Irish. Some common folklore suggested that the Cat Sìth was not a fairy, but a witch that could transform into a cat nine times.

The people of the Scottish Highlands did not trust the Cat Sìth. They believed that it could steal a person's soul, before it was claimed by the gods, by passing over a corpse before burial; therefore watches called the Feill Fadalach (Late Wake) were performed night and day to keep the Cat Sìth away from a corpse before burial. Methods of "distraction" such as games of leaping and wrestling, catnip, riddles, and music would be employed to keep the Cat Sìth away from the room in which the corpse lay. In addition, there were no fires where the body lay, as it was said that the Cat Sìth was attracted to the warmth.

As I've discovered over time, the inclusion of animals can often enhance certain scenes, and can inject humor into the mix as well.

Writing as myself, and then switching to my literary pseudonym Deidre Dalton, entails a complete change in mindset. While most of my books are generally descriptive, those written under the "Deidre" hat tend to swim in much darker waters. This isn't to say I possess split personalities, but the creative direction requires a definite swing in focus.

The books I've written under the "Deidre" moniker go deeper into the dark side of various personalities, and some of the actions undertaken thereof require a balance between good taste and blatant sexuality and/or violence. If I were to psychoanalyze myself, I'd have to say this all began in my teen years when I wrote murky verses and followed my morbid train of youthful thought, as evidenced in my book of poems known as Torn Bits & Pieces. 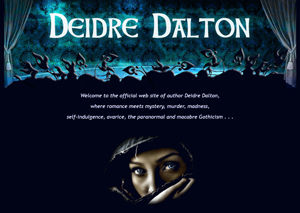 The fictional result of my shadowy ventures has become the Collective Obsessions Saga, to be followed closely by The Bloodline Trilogy. When the trilogy is complete sometime next year, I'm not sure where I'll head wearing my "Deidre" hat. Anyone's guess is as good as mine, but rest assured Deidre Dalton will make a reappearance, in one way or another.

I rarely make mention of my personal life, and over the years have kept reference to it at a bare minimum. However, most people know I've been married three times as I am not ashamed of it, nor do I attempt to hide it. The marriages were all lengthy, and all ended for a variety of reasons.

While my personal life journey has never taken an easy or normal route, events occurring in 2018 were bizarre even for the likes of me. Yet they resulted in a happy set of circumstances. To make a long story short, my first husband, Jerry Dalton, contacted me via Facebook on October 20, 2018, sending me a friend request. We had not seen or spoken to each other in more than twenty years. In the interim, we had both remarried and carried on with our lives.

Meeting again for the first time after two decades was quite amazing in itself, but what followed was even more remarkable. We again developed a relationship rather quickly, and within six months had moved in together. We've been cohabitating ever since, and to that end I definitely consider Jerry to be my "significant other."

We recently went to dinner with some old friends, Ben Opfermann and his wife, Sharon. Ben was there when Jerry and I met for the first time, many years ago. The three of us worked together, and Ben was privy to our first courtship and subsequent marriage. He was kind enough to take a picture of us at the recent dinner. I took the photo and placed it in a frame with a picture of us all those years ago.

Life can turn on a dime, and then come full circle. I'm living proof of it, happily.

And if anyone ever wondered about my use of the writing pseudonym Deidre Dalton, the truth is now finally revealed. ;)