I keep track of the many "symbols" in the Bloodline Trilogy in a separate document, which will never be seen by anyone but me until all three books in the trilogy are complete.

Here's a snapshot of one of the symbols from the upcoming Bloodlust. 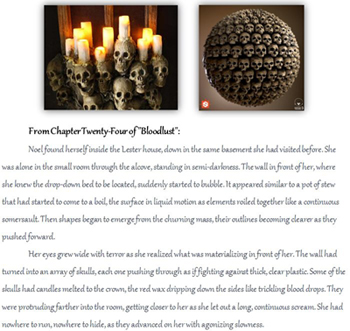 It's known as a "Skull Sphere" for my fictional purposes.

A snippet from Chapter Twenty-Four of Bloodlust:

Noel found herself inside the Lester house, down in the same basement she had visited before. She was alone in the small room through the alcove, standing in semi-darkness. The wall in front of her, where she knew the drop-down bed to be located, suddenly started to bubble. It appeared similar to a pot of stew that had started to come to a boil, the surface in liquid motion as elements roiled together like a continuous somersault. Then shapes began to emerge from the churning mass, their outlines becoming clearer as they pushed forward.

Her eyes grew wide with terror as she realized what was materializing in front of her. The wall had turned into an array of skulls, each one pushing through as if fighting against thick, clear plastic. Some of the skulls had candles melted to the crown, the red wax dripping down the sides like trickling blood drops. They were protruding farther into the room, getting closer to her as she let out a long, continuous scream. She had nowhere to run, nowhere to hide, as they advanced on her with agonizing slowness.