I've been a big fan of cozy mysteries for several years now. They are a wonderful way in which to relax and not over-think. That's not to say the writing is below par but rather well done to entertain without having to ponder the outcome for too long. In addition, the books remind me of the gothic novels I read as a teenager. Nothing too racy going on.

Cozies very rarely focus on sex, profanity or violence. The murders take place off stage, and are often relatively bloodless (poisoning), while sexual activity (if any) between characters is only ever gently implied and never directly addressed. The cozy mystery usually takes place in a small town or village. The small size of the setting makes it believable that all the suspects know each other. The amateur sleuth is usually a very likeable person who is able to get the community members to talk freely about each other. There is usually at least one very knowledgeable, nosy, yet reliable character in the book who is able to fill in all of the blanks, thus enabling the amateur sleuth to solve the case. 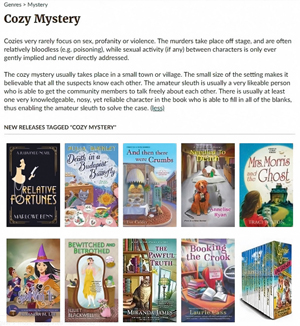 For me, it started with Diane Mott Davidson and her Goldy Schulz Culinary Mystery series. Next came Coffeehouse Mysteries by Cleo Coyle, followed by the Haunted Bookshop Mysteries by Alice Kimberly (aka Cleo Coyle), and the Clambake Mysteries by Barbara Ross.

My current reads are the Cat in the Stacks mysteries by Miranda James and Witch City Mysteries by Carol Perry.

The books provide endless hours of relaxation and entertainment. I know there are scores of other "cozy" mystery books waiting in the wings, so I don't think I'll run out of them any time soon.