Odd as it might sound, a lot of research goes into writing certain fiction novels in order to give locations and events precise, non-fictional aspects. At least, that's how it works in my case. As I'm writing, I tend to mix in doses of reality here and there, which can often include genuine people, accurate street names in real cities (sometimes with calculated distances), and bona fide public establishments (local restaurants specifically, historical landmarks or shops).

For example, the two main characters in Bloodlust (Kate Grady and Kirk Lester), travel to Great Britain for an extended stay before returning to their native Boston. To be exact, they reside in Chester, England for a period of time. Since I've never been to Chester, nor do I have the wherewithal to hop on a plane to go and see it for myself, I rely on travel publications, friends who have been to the city, and internet resources, to give me a general feel for the place.

For story purposes, I've been focusing on the area known as The Rows in Chester. The characters live and work there, so I wanted to provide a sense of authenticity to the scenes involved. That's not to say there is a boatload of information about Chester in the storyline, yet there is just enough to give the place definition and to hopefully provide a genuine visual of the location. Little details that seem inconsequential, such as room ambience or style, are actually crafted on purpose, and well in advance. 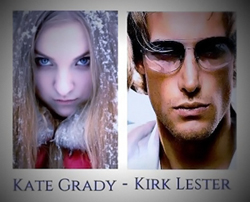 The characters Kate and Kirk reside in a cottage on The Rows, staying with Kirk's great-aunt for a spell. I looked at photographs of cottages and businesses in the area, scrutinizing street maps so when Kate takes a casual walk, it seems as if the reader is actually there. At least, that is my aim when combining fiction writing with existing locations.

It strikes me as somewhat comical to present a fictional story while paying close attention to little doses of reality. If it's pure fiction, why not go all the way with the fantasy? However, I've always written with an eye to the tangible and don't know if I could do it any other way.

Research can often send me veering off course for a few days when I'm in the middle of writing. I recently purchased a UK travel guide, and also did hours of perusal about Chester online. This includes images. I'm always inspired by visuals, which give me the wherewithal to paint a picture in words of a particular setting, event or person.

As Bloodlust progresses, I've decided to assign various parts to the storyline as I go forward. The following is the current layout (which can be subject to change):

The newly-included various parts are the result of Kate's evolving character, which she discovers as events unfold. In essence, she learns what she is capable of in a paranormal sense, and begins to use it to her advantage. One part of Bloodlust also clears-up some of the mystery surrounding the character Shoji (as evidenced in the same-named section), who was a semi-recurring presence in Bloodfrost, first book in the Bloodline Trilogy. Is Shoji a servant of good (heaven), or evil (hell)? I hope to shed some light on the matter in Bloodlust, without giving too much away. Besides, I've slated Shoji - along with his sidekick Hoshi - to make an appearance in book #3 of the trilogy, Blood & Soul, as well.

It's hard to predict when Bloodlust will be complete. I was originally shooting for late summer, but autumn-into-winter might be more realistic at this point. I'm thoroughly enjoying the process of fleshing out the characters as the story develops in my head. Symbolism is also weaving its way through the storyline, which I'm tracking carefully because it has to overflow into Blood & Soul, third book of the Bloodline Trilogy.

I want the transition to appear as seamless as possible, not always an easy thing to accomplish with a continuing narrative.