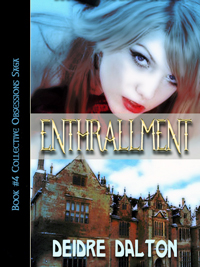 The press release on my web site went as follows:

Enthrallment was released by Club Lighthouse Publishing today. The book was written by Deborah O'Toole under the pseudonym Deidre Dalton.

George Sullivan reunites with his long-lost love Susan O'Reilly. Their daughter Carly enters into an unholy alliance to secure her position as Liam Larkin's wife. As secrets unfold and more madness takes root, Carly plots a twisted scheme to exact revenge on the Larkin family...

Enthrallment is Book #4 in the Collective Obsessions Saga, which chronicles the extraordinary loves and obsessions between two families sweeping a span of more than one hundred years, all set against the backdrop of a Gothic seaside mansion in Maine.

Enthrallment was scheduled for release on July 1st, but I'm certainly not complaining that it arrived a week early. I know I've said it before, but the thrill of a new book release never gets old. I also like the cover design, which gives a true depiction of the character Carly O'Reilly in the storyline.

I'm lucky that my publisher sincerely considers my suggestions for covers, probably due to my own long experience in the area. This was the initial working cover for Enthrallment, which I designed:

For more, visit the Facebook page just launched for Enthrallment.