Excerpt from Chapter Four of The Crypt Artist by yours truly.

Brief synopsis of the story: A near-starving painter finds himself inspired by a group of long-dead classic artists in a rundown loft in Soho, New York. 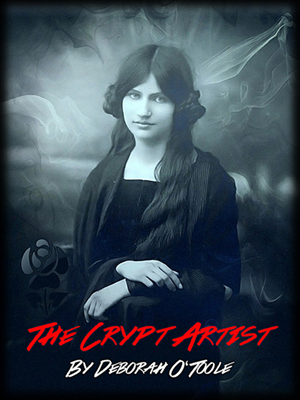 "I TOLD YOU THE MUSIC was a bad idea," Howard Russell Butler snapped in a hushed tone, his dark eyes flashing angrily. "The drunk down the hall heard it, and he came looking for it."

"That, my dear, is a matter of opinion."

"And mine counts just as much as yours," she returned crossly.

The light flickered back on in 2E, illuminating the drab, lifeless room in all its neglect. Bookshelves built into the wall were covered in a thick coat of dust, with several electrical wires hanging down from the ceiling. Three old chairs, covered in grimy brocade, were positioned in a circle in the middle of the room. The chairs were arranged around a low, flat coffee table that held a gas lamp and an ancient black wax dictation cylinder.

The ensemble in the room also included five gossamer figures, all of them dressed in clothing from the era in which they came. Three men occupied the chairs, each one regarding the other with vague hostility and skepticism.

A short-statured man in a black wool suit paced the room in a circle, from one end of the space to the other, muttering under his breath as he did so. "This feckin' place is as much a disaster now as it was when I lived here." His Irish brogue became more pronounced as he continued addressing the room in general but no one in particular. "Those bloody Ramsey's never did know their arses from their elbows. What a sorry lot of bumblers."

"Oh do be quiet, Malachy, " Howard barked, his brow furrowing with irritation. "I've heard just about enough of your paddy twaddle."

"Yes, please Malachy, be quiet," Jeanne pleaded softly from her place by the window. "I'm trying to think, and your gabble is making it impossible."

"Well, pardon me," Malachy retorted indignantly, stopping in his pacing to stare at the woman. "Who croaked and made you Queen of Sheba, may I ask?"

Jeanne dipped her head, her long dark brown hair dangling at the sides of her face. "I meant no disrespect," she said, her voice barely a whisper. Her French accent was so thick it was nearly indecipherable. "I'm having a difficult time with my thoughts. Please try to understand."

"Poor little colleen," Malachy clucked sympathetically. "I'm sorry, Jeanne. I keep forgetting your unfortunate dilemma. Will you be forgiving me?"

She looked at him with her doe brown eyes, and sighed tremulously. "Oui, Monsieur O'Leary." With that, she turned to face the window again, her thin hands touching the cracked and dirty pane. She began to roll back and forth on the balls of her feet, a slight moan coming from her lips. And so she always remained, until she was driven to interact with her strange companions once more.

Malachy resumed his pacing, muttering under his breath again. "The feckin' shyte I have to endure just to gather me own thoughts . . ."

"The pair of them are as mad as the march hare," observed John Quidor, a tall, devilishly handsome specter with black hair and dark green eyes. His gaze went to Jeanne by the window, taking in her beautiful hair and slightly swaying body.

"Let's get back to the problem at hand," Howard said crisply. "The drunk down the hall nearly caught us out."

"It's not going to happen," John disagreed, his eyes leaving Jeanne at the window and instead focusing on Howard. "You may not want to face facts, Howie, but we're as dead as doornails. We're just ghosts, sitting around in this vile little room. The drunk can never catch us out, as you implied. It's logistically impossible."

"He heard the music," Howard insisted, his glare turning to the pacing Irishman. "All because Malachy wanted to listen to Shadows of the Night."

Malachy paused in his pacing again, returning Howard's glare. "The music is a memory from the lad's childhood. What's the harm in it?"

"And how do you know it's a childhood memory for him?" Howard prodded.

Malachy resumed his pacing. "I'm Irish, my good man. We have ways and means into the souls of others."

"What a load of codswallop!" John broke in with a laugh. "More of your Irish blarney, no doubt."

"May the lamb of God stir his hoof through the roof of heaven and kick you in the arse down to hell," Malachy responded with glee.

"Even more of your heathen gibberish, Malachy?"

"I'll leave that for you to decide, ya feckin' gobshite," Malachy hissed.

"Enough!" Howard roared angrily, annoyed with the pointless banter. He turned his head to stare at Malachy. "Do you know something we don't?"

"The lad you refer to as the drunk needs our help," Malachy said plainly. "And we're going to give it to him."

"The Crypt Artist" cover designed by Deborah O'Toole (all sizes and related logos). Book Cover Photo: Jeanne Hébuterne (1898–1920) image source (Galerie André Roussard, Montmartre); date of image unknown. The image is in the public domain in the United States of America, which applies to U.S. works where copyright has expired because its first publication occurred prior to January 1, 1923.

I'm hoping to finish The Crypt Artist this year, with a release date sometime in 2019.