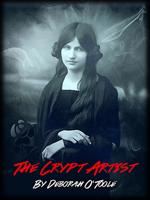 The Crypt Artist has been released by Club Lighthouse Publishing, with both the paperback and e-book editions now available from Amazon.

What can I say about The Crypt Artist? The book was a definite labor of love for me, without a doubt. There was something about it that drove me, day after day, until the story was complete. I was enchanted with all of the characters that I developed over time, my two favorites becoming Irish poet Malachy O'Leary and the indomitable Howard Russell Baker. The verbal exchanges between Malachy and Howard had me laughing out loud on several occasions, even in the quiet and solitary world of creation. The fact that Malachy and Howard are both ghosts made their well-aimed barbs all the more deliciously comical.

To learn more about the ghostly characters and their quirks found within The Crypt Artist storyline, visit the book's official website >

After reading The Crypt Artist for the first time earlier this year and during the editing process, my publisher sent me the following message:

I have to say I really loved this one. It's different from your other works and I wouldn't mind seeing more along these lines. Too bad this one couldn't have been set up for a sequel. I really fell in love with just about all of the characters . . . including the ghosts, even the curmudgeonly one, Howard.

I'm indebted to Terrie Lynn Balmer, CEO of Club Lighthouse Publishing, for a variety of reasons - such as her enduring friendship and humor, not to mention our mutual love of cats and animals in general - but also for giving me a chance in the first place. Nearly a decade ago, Terrie took on the eight novels that comprise the Collective Obsessions Saga (written by me as Deidre Dalton), and for that I will always be grateful.

I'm also very pleased with the front and back cover designs for The Crypt Artist. Many thanks to James Wason for his talent, and for his patience in working with me to finalize the creations. 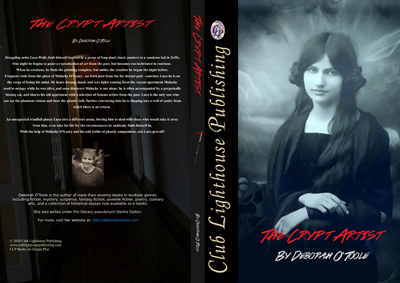 There are three other people I would like to thank, for without them The Crypt Artist would not be what it is today.

I'm also very fortunate that most of the people around me are patient, understanding the writing process and giving me indulgences to do so at my own obsessive pace and style.

You know who you are, and thank you.