Every five years or so, I re-read favorite novels with relish. It might seem silly since I've read them before and already know the outcomes, but revisiting certain books always gives me great pleasure. The top three titles have not changed in many years.

Comments about the books come from my reviews of the specific novels. 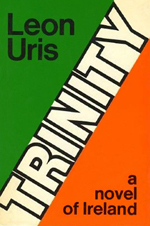 Trinity by Leon Uris is the great novel about Ireland. If you had no passionate feelings about the Irish culture and their struggles before, you certainly will after reading this book. There are some parts of the book - taken straight from a page in history - that will outrage a person of Irish descent (the "Penal Laws" being one example). Leon Uris brings to life this terrible struggle within the Irish people, not only for independence from the British but from their own inner struggles about right and wrong, and their own morality.

Terrorism is a deadly and hellish business in any situation. The "war" in Northern Ireland was not only about terrorism – it was about the right of people to worship as they please, and to decide and govern their own laws. Any act of violence is reprehensible and beyond the pale. However, it is a fact of life in this day and age and in the many centuries before the modern turmoil.

Trinity is a fictional story only in the sense of the main characters, but the struggle and the sadness and the terrors are all too-real. The history in this story is dramatized in many powerful scenes, and at times Uris' writing is strongly eloquent. The book has a relentless power and drive (almost on its own, it seems at times), and is based on real tragedy in Ireland. Mr. Uris has neither diminished nor made trivial this despairing heartbreak. 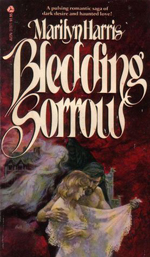 Bledding Sorrow by Marilyn Harris is one of those books you simply cannot put down once you start reading it. The book is intriguing, yes, and very dramatic, but is also twisted in such a fashion that only English writers seem able to achieve. Obsessive fetishes and mental preoccupations are very normal in Bledding Sorrow, as are the oddly humorous scenes and deadly serious episodes. It is an utterly fascinating read, yet at the same time strangely repulsive.

If you have read other books by Marilyn Harris, then you will most likely understand her style. There is an eloquent human element in her prose, as well as an appreciation for the sadomasochist existing in all of us to some degree or another. If you take the time to read Bledding Sorrow, you will find the adventure quite worthwhile and oddly satisfying.

The cast of characters in this book is truly amazing, some of them are quite funny. My favorite has to be Mavis Bonebrake, who is the "cook" of the facility. Mavis is one of the most gross and disgusting characters you will ever come across, not only for her complete crudity but for her ghastly appearance in the story. She is physically repugnant. Her favorite pastime is regaling fellow workers and tourists alike of her active sexual life during her London winters. Mavis seems to love the shocked reactions she gets from people.

Martin Axtell is the local doctor in Bledding Village, and a closet homosexual. His dearest longing in life is to live in blissful harmony with Geoffrey Bledding at the estate, with the two of them as lovers, of course. Martin Axtell regularly pays visits to Ann Bledding, usually after Geoffrey has beaten her when she rejects him sexually. The good doctor keeps all of the abuse secret, naturally, as he truly wants Geoffrey for himself.

Bledding Sorrow remains one of my all-time favorite books. The first time I read it in the mid-1970's, I thought it would make a great movie. As the years passed and I reread the book several times, my perception of it changed. I became more aware and understanding of certain writing elements. It struck me that Bledding Sorrow is true brilliance at its best. It is riveting, sadly tragic, very "English" and certainly laugh-out-loud comical at several points in the story. 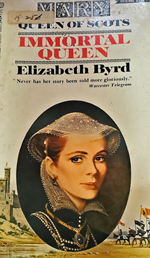 The story of Mary, Queen of Scots is not new by any means and is certainly not original anymore. How many times can you tell the same story? I've read dozens of books about Mary, but the version of her life written by Elizabeth Byrd is by far the most outstanding work.

Elizabeth Byrd writes with a flair for the dramatic, while at the same time keeping true to the historical facts of Mary's life. Ms. Byrd paints Mary as a real woman, with real feelings and desires. This is not a romance novel, although it may seem so when Mary falls in love with Lord Bothwell. The book is written in dramatic sense that is easy to understand, even if you don't know anything about Scottish history. The dialog is descriptive, as are the customs of the day.

This book is one of the best-written I've ever read. I rank Immortal Queen with some of my favorites: "Bledding Sorrow" by Marilyn Harris, "Trinity" by Leon Uris, "The Thornbirds" by Colleen McCullough, "Shogun" by James Clavell and "A Woman of Substance" by Barbara Taylor Bradford. In fact, if you liked "A Woman of Substance," you will love Immortal Queen. The two books are basically about the same thing: in essence, powerful women pitted against men in a world where women were meant to stay home and have babies. The pressures and difficulties women experienced were real and daunting. Mary's plight was almost insurmountably complex in the world of 16th century Scotland and England. Religion was an issue as well, but Mary remained firm to her Catholic faith and never wavered.

Mary had quite a life and it is almost impossible to tell the story in one breath. Ms. Byrd writes Immortal Queen with accurate historical fact, but the lively dialog and circumstances are played out in such a mesmerizing fashion that one can't help but like Mary, Queen of Scots. She was human, after all, with all of the typical frailties and insecurities. Even if you know next to nothing about Mary's time and place in history, you will quickly become fascinated by it once you read Elizabeth Byrd's outstanding account.