This was the "working" cover for Hearts Desires for quite awhile, pre-book release: 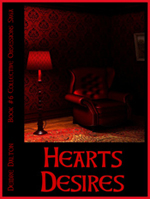 The red room was indicative of a bloody scene where Jack Sansovino rapes Jamie Page and then beats him to a near-pulp. The incident takes place in the bedroom of Jamie's cottage, a short distance from the Larkin mansion.

The second cover was rather vague, but I liked the design anyway: 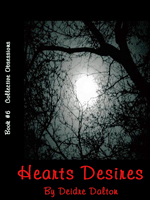 The third cover was a rendition of semi-main characters Brose Larkin and Bridget Gallagher in an embrace as they look out over Larkin City under a starry sky: 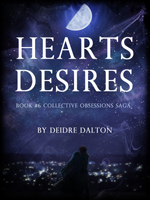 The fourth - and official e-book cover - for Hearts Desires was rendered by T.L. Davison, which features Jamie, Jack and Jamie's dog in frame: 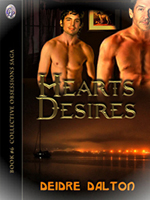 I was uneasy about having two bare-chested men on the cover at first. Not because the men happen to be gay, but suggestive nudity - even with women - is just not my cup of tea.

And the cover for the paperback edition of Hearts Desires: 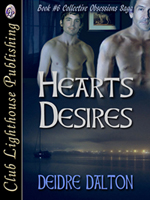 None of the books in the Collective Obsessions Saga are heavy on sex scenes. How many ways can one write romantic interludes for a connecting series of books that span 140 years? I tried to be creative as the storyline progressed, which sometimes resulted in violence or mild kinkiness, but the scenes are a backdrop rather than the focus.

However, I've come to appreciate the cover for Hearts Desires. Not so much for the men depicted, but for the inclusion of the dog in a framed picture behind them. The image threads into the final part of the saga (Megan's Legacy) in subtle fashion, which will only be realized by readers when they finish the last book.