In the past, there has typically been about a six-month interval between releases of books in the Collective Obsessions Saga. It's not my doing, but rather done at the discretion of my publisher. Therefore, I was more than pleasantly surprised when Hearts Desires was released today, just two months after the publication of The Keeper's Journal. 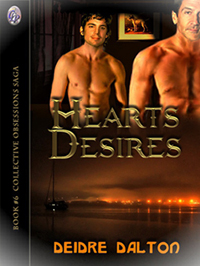 Brose Larkin finds himself falling in love with a local "tomboy" who bests him at every turn. Despite having known her since high school, she is the antithesis of his ideal woman in her simple attire and direct manner. Brose knows he has met his ultimate match in Bridget Gallagher.

Shannon's son Jamie Page begins to understand his lifelong yearnings but fears his family will never accept them. His first love affair with a nefarious character nearly costs his life, but brings to light his hidden desires.

Jamie's sister Angela Page suffers an emotional collapse after discovering she cannot have children. She holes herself up in the attic at the Larkin mansion, much like her ancestors Molly and Patrick Larkin did before her.

Happiness continues to elude the family, as if a dark shadow of evil has settled over the Larkin estate.

I'm also pleased with the book cover, which depicts two main characters in the specific storyline: Jamie Page and Jack Sansovino. The back photo frame of the dog is significant as the pooch figures prominently in a final scene with Jack in Megan's Legacy (to be released around the end of 2013).

With the release of Hearts Desires, there are only two more books to go before the Collective Obsessions Saga is finally complete (The Twilight and Megan's Legacy). The long journey has almost come to a full-circle. Quite literally, it's a dream come true.

Character Comparisons: I'm liberal in my political and social views, so same-sex marriage and relationships have always been issues I consider to be basic human rights. It shouldn't be an issue at all in 2012, frankly. We are all free to choose our own path in life, and it's not up to anyone else to restrict our choices or to pass judgment. Judge not lest ye be judged…Or is it people who live in glass houses should not throw stones?

Throughout all eight books in the Collective Obsessions Saga, there are two central gay characters in relation to the Larkin family. This wasn't something I did on purpose, but rather the characters just happened to blend into the storyline with their lives already written in my imagination. In other words, the two specific characters simply - and inadvertently - worked out that way. They are also related by blood (second cousins twice removed), but never actually meet as they appear in different time periods.

The first man was Jean-Claude Sullivan (grandson of Colm Sullivan from Passion Forsaken), who appeared in Quixotic Crossings, followed by The Twain Shall Meet and Enthrallment.

Jean-Claude was married with a son (George Sullivan/Ben Webb) when he meets Mason Berger, his co-worker at the Larkin Gazette. Jean-Claude's storyline occurs between 1934 and 1985, the earlier portion of which was not known as a time of sexual tolerance. Jean-Claude and Mason are eventually forced out of Larkin City. They begin a new life in Paris, where they are able to live together relatively free of harsh judgment.

It didn't take George long to fully understand the true nature of his father's relationship with Mason Berger. He was slightly repulsed but not overly shocked, having suspected Jean-Claude's inclinations for a long time just by the tone of his letters and the affectionate mentions of Mason. The more time he spent with the two men the more he realized how instinctive their relationship was.

Jean-Claude and Mason seemed to flow together. They finished each other's sentences, or they sniped at each other playfully, just like an old married couple. In truth, the two men were married in a spiritual sense, their unconditional love evident in every touch and vocal gesture.

The second gay man is Jamie Page, son of Shannon Larkin and Scott Page, who appears in parts three through eight of the saga. However, Jamie's sexuality is not really explored until Book Six: Hearts Desires (which takes place from 1996-2000).

Jamie's first romantic experience comes with Jack Sansovino, who first appeared in Enthrallment as Carly O'Reilly's sous chef. During a Christmas party in Enthrallment, Jack spikes Carly's drink with Flunitrazepam (aka roofie, date-rape drug) and then takes her to his flat, where he rapes her. He also allows several of his "buddies" to take turns with her. The "buddies" are actually bookies and loan sharks to whom Jack owes money. He permits them to rape Carly repeatedly in order to erase his gambling debts to them.

Now back to Hearts Desires – it is the first of my books to be classified in the LGBT genre. Hearts Desires also falls into family epic and romance, where it sits with the other titles in the Collective Obsessions Saga.

Jack Sansovino knew Jamie Page was staring at him. He saw the young man from the Amber Whale kitchen as he cooked lunch dishes, and took a particular interest in his flawless handsomeness and quiet demeanor. When Jack entered the dining area, he deliberately walked toward the window overlooking the harbor. The lunch crowd had been fast and furious, and he was ready for a break, but his real reason for venturing out was to get a closer look at the solitary diner.

Jack paused just to the left of Jamie's table, pretending to take a long look out the window into the harbor. He crossed his arms and drew a great sigh, knowing the action would attract Jamie's attention.

In Hearts Desires, Jamie is unaware of Jack's sorted past and falls promptly in love with him. Jack is not gay, but hooks up with Jamie in order to take advantage of his wealth and prestigious family name. The deception takes a psychological toll on Jack, so he begins to drink and gamble heavily again. He beats and rapes Jamie in a drunken rage one night, and then flees Larkin City a wanted man.

Not to worry, though. Jamie finds gentle love with another man in The Twilight, which is part seven of the Collective Obsessions Saga (due for release this summer). While I don't want to give too much away, Jack ultimately gets his comeuppance in Megan's Legacy, the final book in the saga.

Hearts Desires also unwraps the unlikely romance between Brose Larkin and local road crew worker Bridget Gallagher, as well as the emotional upheaval suffered by Jamie's sister, Angie, when she discovers she can never bear children. In addition, readers of Hearts Desires will get a first glimpse of the gaudy but heartfelt Désirée Sansovino, Jack's younger sister.