Over the past few years, I've toyed with the idea of writing sequels to Celtic Remnants, the Collective Obsessions Saga (creating Book #9 in the series) and more recently, The Crypt Artist.

The main character in Celtic Remnants (Ava Egan) dies in the storyline, but those who have read the book know she actually lives. I'm leaning toward the idea of fast-forwarding the story to twenty years later, when Ava and the indomitable Tim O'Casey are safely living incognito in America. Ava's daughter, Chee, would be an adult in such a scenario. Through a chance encounter with her father's old secretary, Chee discovers clues that lead her to believe Ava is still alive, and she acts accordingly.

I'm still developing more ideas for the storyline as of this writing, so keep your eyes peeled for more in the coming months. 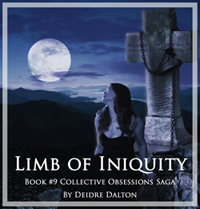 Tentatively titled Limb of Iniquity, a possible 9th book in the Collective Obsessions Saga would revolve around the deadly antics of Alexandra St. John, who first made an appearance in Book #7, The Twilight. In many ways, her character begs for a continuation.

Alex was the illegitimate daughter of Scott Page, who was the longtime beloved husband of Shannon Larkin. Alex was abandoned as a child by her biological mother (Andrea St. John), only to be adopted by Angela Page, Scott's oldest daughter. Alex and Shannon have a difficult relationship. Shannon has little use for her late husband's bastard, barely civil to the child even as she grows into an adult. The hostility also creates tension between Shannon and Angela, a friction that endures for years and creates a breakdown of the mother-daughter bond.

In essence, Alex St. John becomes a literal "bad seed." The makings are definitely there for a continuation of the Collective Obsessions Saga. I've been entertaining the idea for several months, jotting down ideas when they strike me. While I haven't committed myself to Book #9 (Limb of Iniquity) in the Collective Obsessions Saga, it is becoming a distinct possibility in the future, perhaps in 2023-24 or thereabouts.

My publisher actually urged me to eventually write a sequel for The Crypt Artist, telling me in May 2020 (just prior to the release of the book) that she so enjoyed the character portrayal of Malachy O'Leary she would like to see him make an appearance in a future novel as the star attraction:

What can I say about Malachy, except that he's just perfect little leprechaun of a ghost. Love him! I'd love to see him featured in another story. You know you could probably create another story around helping those ghosts work their way out of their purgatory, helping someone else in the Ramsey building or otherwise.

At first, I wasn't sure how to continue with Malachy, mainly because he settled his unfinished business on earth, came to terms with his foibles while in human form, and helped main character Luca Wolfe out of a near-fatal pickle. Yet the more I consider a sequel to the story of Malachy O'Leary, the more ideas that come to me.

The tentative working title for The Crypt Artist sequel is Spirit of the Ossuary.