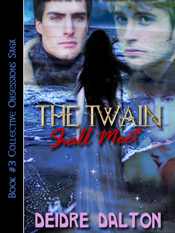 One particular character in The Twain Shall Meet almost didn't make his debut as planned. We were inches away from a major character re-write before the final draft of book was settled, much to my alarm.

There is a subtle method to my madness in the connecting storylines and character developments in all eight books of the Collective Obsessions Saga. Each one threads to the next, with every detail – no matter how small – seeming to appear without effort. However, certain dialogs, character quirks, locations and various scenes were carefully plotted. It is also one of the reasons it took so long to write and finish the eight-part family saga.

I had to zealously pitch the character of Mike Sullivan in The Twain Shall Meet to my editor, who was of the initial opinion he was far too young to have feelings of intense love and incapable of the emotional temerity to methodically stalk Shannon Larkin.

In the beginning, Mike is almost too good to be true. Sweet, happy and seeming to be without a care in the world. Physically, he is nearly perfect – almost a mirror image of his ancestor Colm Sullivan, the first lighthouse keeper at Banshee Point as he appears in Passion Forsaken (Book #1 in the Collective Obsessions Saga). Mike is tall, blond and fully graced with the deep voice of a man.

Mike's feelings for Shannon ignite during an off-chance meeting when they are small children, and then accelerate when both of them are well into their teens. Mike's knowledge of a century-old secret between their respective families convinces him destiny brought them together. Nothing will change his mind in the matter, not even when Shannon disentangles herself and moves on without him.

After she read through the manuscript, my editor sent me the following note:

My only concern is about Mike being fourteen when his obsession for Shannon takes full grip of him. I'm not sure how realistic that will appear. Does any teen feel that deeply for anyone, really?

To rationally validate the existence of Mike and his actions in The Twain Shall Meet, I wrote back:

As for Mike being so young and obsessed....I sort of liken it to more modern times, even though the particular storyline takes place in the 1970's. Kids as young as eleven, twelve, thirteen seem quite capable of meticulously planning school massacres (taking guns to school and blowing away their classmates), so surely they are capable of other obsessive behaviors in relation to sex and feelings of love/hate. What about the stories of female teachers seducing their young male students, some of them convincing the teens to do just about anything for them? Shannon is not a teacher and Mike is not her student, but I think the "obsessive" behavior is definitely possible. Rare, but possible.

Maybe Mike was just ahead of his time. And don't forget, he might have inherited the "mad" gene from one of his wayward ancestors. Actually, Mike's physical appearance and maturity were based on a real person I knew (when I was seventeen and he was fourteen), as were some of the scenes between the fictional Shannon and Mike. So yes, I think the behaviors are possible in teens.

Did I convince you?

My pitch worked because Mike's character remains unchanged in The Twain Shall Meet. As he is an integral part of the story, especially in the beginning of the book, I'm relieved the artistic hurdle was overcome.

And yes, I did base Mike's character on a "real" person. This particular fellow was someone I knew many years ago, and we did have a romance of sorts. However, the "real" Mike was not a demented stalker and we remained friends long after our summer fling. He read bits and pieces of The Twain Shall Meet and was tickled by the embellishments I chose to weave into his character.

And I'm grateful my editor agreed to give Mike a chance in The Twain Shall Meet. His character is not one that will soon be forgotten, which is fully demonstrated as the Collective Obsessions Saga progresses.

While writing The Twain Shall Meet, I had an idea of how Mike Sullivan looked in my head. It had nothing to do with the actual person or their personality, but rather an offering of physical characteristics only.

The image above left is of the actor Jason Connery as he appeared in the TV series Robin of Sherwood. I'm not terribly keen on blond-haired men personally, but if the character was to have wheaten hair, who better to base him on? The image above right is the final rendition of Mike Sullivan as he is portrayed on the cover of The Twain Shall Meet.

At various points in the Collective Obsessions storyline, Mike and his look-a-like ancestor Colm were both described as "perfect specimens of male beauty."

Maybe that helps, and hopefully no one takes offense at the imagery.